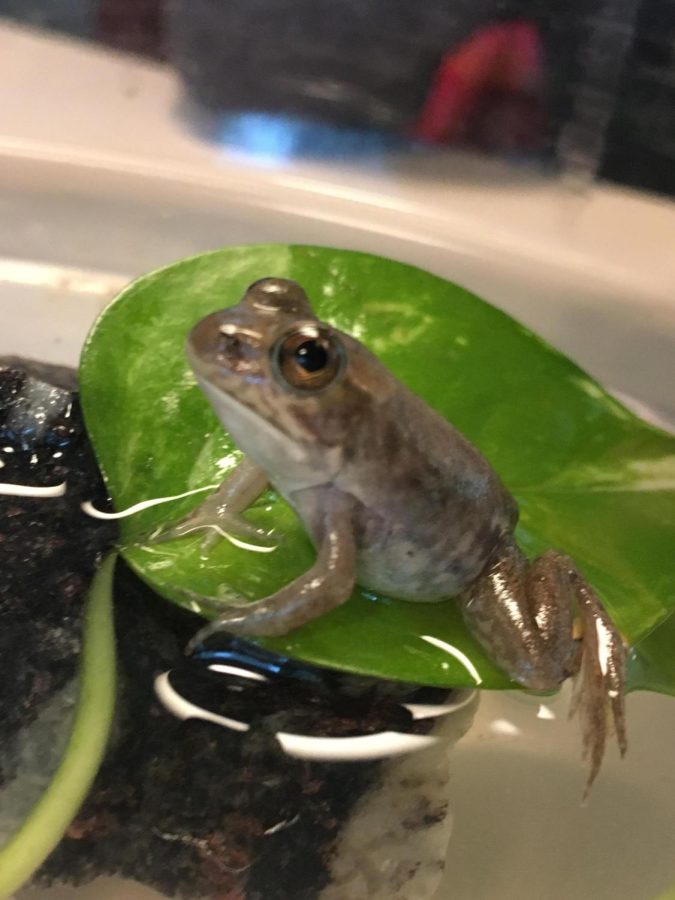 Room 236 at Edison Intermediate School (EIS) recently had a new addition. Named “Gerald” by students, this newcomer was not a human– but rather, a developing frog. Science teacher Ms. Kristi Houghtaling purchased 24 tadpoles, but Gerald was the only survivor. Gerald’s metamorphosis process piqued the curiosity of Ms. Houghtaling’s students, the primary caretakers and observers of the frog. “[Gerald] has recently started losing his tail and becoming more of a full-grown frog. And he’s very fun to have in the classroom. It’s very nice to be able to take care of him and talk about him and just look at him,” explained eighth grader Flynn Martin when Gerald began his young frog life at EIS.

The students quickly grew fond of the little frog. Gerald became a well-known figure in the biology class, often showing up in cartoonish drawings. Some students spent time before and after class watching the frog in his decorated tank. “I think Gerald was like a mascot for a class. He got everybody excited about watching him go through metamorphosis and change,” commented Ms. Houghtaling.

However, Gerald was not the only animal to have lived within the school. Class pets are a phenomenon that has appeared in many classrooms both at EIS and elsewhere. While to some, they may seem odd for a school environment, many think that they are beneficial to the class. Eighth grader Emma Blaustein stated, “I think for each class [a pet] provides a different learning experience. For biology, having a pet shows us the different metamorphosis processes, which is a part of biology. For other classes, they might teach kids about responsibility.”

Proponents of class pets often claim that they teach kids life lessons. Caring for an animal requires responsibility; the caretaker has to provide it with whatever it needs. “When we take breaks from school, someone has to take the pet home and take care of it. So it becomes part of not just your school experience, but your home experience. I think taking care of a pet is a good way to learn responsibility,” explained EIS principal Dr. Matthew Bolton.

Whether or not class pets teach these things, Gerald was beloved by students and teachers alike. His popularity among students demonstrates what is arguably the most important benefit of class pets: people like them. Gerald passed away on May 31st, but his memory lives on through the students. “I think [owning a class pet] is a good, motivational thing. It’s a lot of fun, and I would definitely recommend it,” concluded Mrs. Houghtaling.