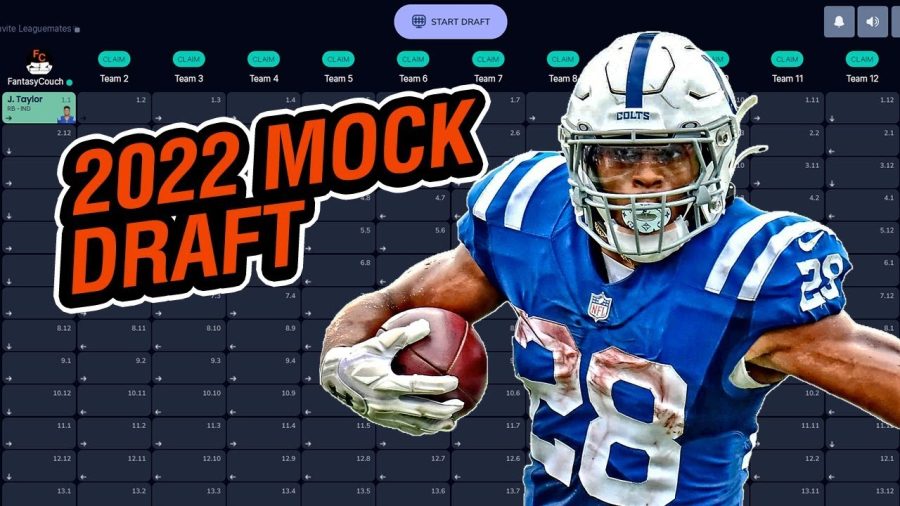 Recently, Carter and Jonah from Carter Jonah Sports Buzz (CJSB), released their NBA playoffs predictions. Now they are back onto the rowdy debates of this upcoming NFL season!

Every kid remembers who they took with their first pick of their first fantasy football league. For Jonah, it was Eagles star running back LeSean McCoy. However, for Carter it was the undisputed G.O.A.T… Tom Brady. Many of these life long memories will be created for young kids and adults across the globe this upcoming fantasy football season. CJSB is looking forward to providing tips, tricks, and strategies to assure you that your fantasy football experience isn’t crushed. Whether it’s by working the waiver wire, making trades, and most of all … drafting, we have you covered.

It is not a surprise that the most substantial player in the draft could be a bust, or a late round pick explodes up to an all pro level. Even worse, people are drafting rookies in the first three rounds that have very minimal experience in the big league. Ja’marr Chase, Justin Jefferson, Clyde Edwards-Helaire, Najee Harris, Jonathan Taylor, and many more are amongst the greatest rookie years in fantasy football history. We will inform you of these rookies and even take a dive into more outstanding and high value draft picks.

Who are going to be the best quarterbacks?

A quarterback’s (QB) success depends on how good his wide receivers can get open. QBs in the offseason lost and gained a number one target. One massive example of this is Aaron Rodgers and Derek Carr. Rodgers lost the best receiver in the league, Davante Adams, and Derek Carr with the help of the Raiders staff picked him up. These given players’ fantasy value has skyrocketed or fallen dramatically. Some quarterbacks are still developing and have a promising year ahead of them. Joe Burrow and Jalen Hurts are both in their third year. They are both part of the most exceptional young talents the league has to offer. We can expect them to be drafted higher than you think due to the fact that young players tend to be fan favorites.

CJSB and other vital sources have come to the conclusion of a list of the top ten QBs in the nearing fantasy football season. Some things stay the same as Patrick Mahomes is still the number one guy. Jack Doherty, a sixth grader from Edison Intermediate School (EIS), states his opinion on this controversial debate. “I would probably go with Patrick Mahomes first because he is young and overall the most consistent, but this season he will not have the best wide receiver core.”

Who is going to be the best wide receivers

When drafting for fantasy, the only thing you think about is points. A wide receiver (WR), is somebody that can rack up points continuously week after week. Unfortunately, they aren’t the most consistent with scoring 20+ points per game, but they are very capable of doing so. Thankfully, this position is filled with incredible studs like Justin Jefferson and Cooper Kupp. With tons of WR moves in the postseason, we are guaranteed to see new talents arise, especially individuals who are young, explosive, physical, and diligent. CJSB has had much trouble coming up with a final list because they have their eyes on many different players. Carter and Jonah, the two teen sports analytic gurus, looked at many different aspects such as the team’s quarterback, and other receivers on the team that can steal the spotlight, as well as personal components of their game.

CJSB has officially released their favorite WR for this approaching season:

Who is going to be the best running backs

The most dominant forces of football, especially in fantasy football, have continued to be running backs. They are clearly the most important, crucial, and skilled position, and that is why the first round of a typical fantasy football draft mostly consists of running backs. In the past decade, we have seen absolute monstrous seasons out of some of these backs. Jamaal Charles, Derrick Henry, Christian McCaffrey, Saquon Barkley, DeMarco Murray, Jonathan Taylor, and many more entire tanks have rolled through this league running through any defensive back in their way. In several past seasons, fantasy football experts have been completely wrong when discussing and bringing through their lists of top running backs. Every single year, the number one running back gets hurt and becomes an overall bust. You just have to deal with the fact that some of these guys get banged up throughout the season. CJSB’s list will guarantee you that no season ending injury happens to your guy. Injury history plays a big role in CJSB’s half back list. CJSB has used many sources to come together on a final conclusion for this year’s list. Mr. Matthew Varhley, an eighth grade social studies teacher at EIS mentions, “I would honestly have to say Derrick Henry. Although he is coming off of a season ending injury, he should come back fully healthy. I would keep a close eye on him, especially this fantasy season.”

CJSB formally declared their list of top running backs for this forthcoming season:

Who is going to be the biggest late round steals?

There is always that one player that you wished you had picked above the 5th round. Last year it was Ja’Marr Chase, and this year, there are a couple of guys that have the chance to prove themselves as a dominant force in the NFL. Coming from college, and then into the draft, it is hard to determine which players are NFL ready, and which players are not. However, this topic of rookie steals is not always the case. There have been many circumstances in which players who have been in the NFL for three, four, five, and so on, who finally breakout and become one of the league’s finest and accomplished players. Statistically, the highest chance of a breakout season is the second year. These players have gained experience and are still young enough to create an incredible career. CJSB takes into consideration the situations that these young talented players are in. For example, Amon-Ra St. Brown was probably the second best rookie receiver, despite the fact that he had Jared “Goofball” as his QB. CJSB and other deep sources with much intel have seemed to agree with CJSB’s picks. Jake Dickey, an eighth grader at EIS expresses his strong opinion, “Elijiah Moore, he is a great player. The last four weeks of last year, Moore really came into his own as a player. He was not the most healthy last year, but he is going to come back very healthy, and now he is going to be led by a more experienced quarterback. Overall, he is going to be a crazy steal.”

CJSB other great last minute steals (not in order):

Who are going to be the best rookies?

The NFL draft determines careers in both positive and negative ways. Jonah from CJSB, as a Jets fan, likes to say, “I can’t wait to get our hopes up with young talent, then ruin their careers because they are on the Jets, and then do it over and over again.”

However, when great players fall into the hands of a great organization, they could be highly dangerous. Last year, it was players like Ja’Marr Chase and Najee Harris. This year, there are multiple, great chances that a rookie will have a baller season. Even though some of these players are on bad teams, they have enough raw ability to run through defenders and moss cornerbacks. Clearly, a team can ruin an outstanding stud, however, sometimes this is the opposite and the rules can reverse. One player can create a whole new franchise and can create tons of opportunities for the team. Overall, this just means that we will have a new big man on campus. CJSB has freshly spoken with new sources on this parley. One of the sources, Tyson Varner, a seventh grader at EIS, asserts, “Breece Hall will be the best rookie in this year’s class because he is strong, athletic, and has good juke moves. Also, he has a good offensive line to run behind.”

CJSB other amazing rookies (not in order):