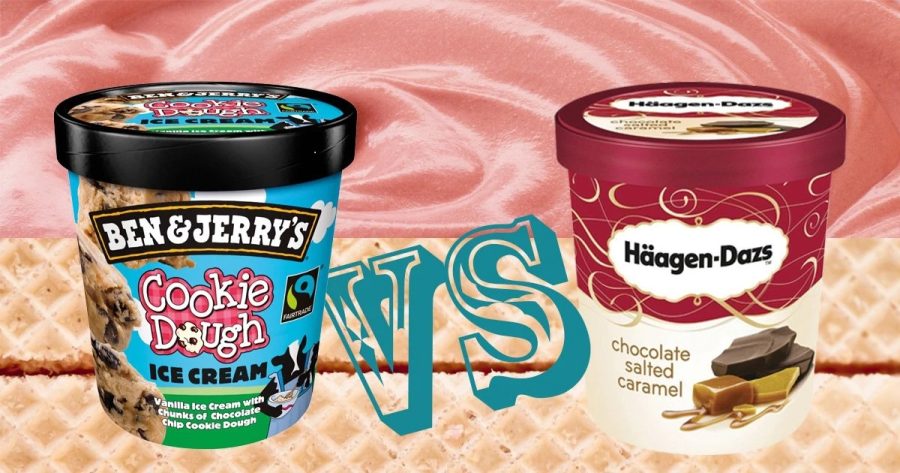 Two pints of ice cream were in the fridge, you had no idea what either brand was, and they were the exact same flavor. Would you grab the fun, exciting packaging, or the dull, boring pint?  Hopefully you would reach for the more intriguing pint. Good choice. That pint is Ben and Jerry’s finest. Now, let’s say you grab both of them and take the same sized bite out of both of them. Automatically, you would go for seconds for Ben and Jerry’s ice cream instead of Häagen-Dazs. It is a fact how much effort and preparation is put into each and every ice cream brand. However, Ben and Jerry’s is clearly one step ahead in their ice cream making. It certainly takes the sprinkle!

Ben and Jerry’s ice cream is known for their wide variety of unique and flavors with extremely creative names, like Chunky Monkey, Phish Food, Half Baked, Milk and Cookies, Red Velvet Cake, etc. whereas Häagen-Dazs only has a few of the basics. More variety leads to more options, and more options lead to more sales. Although they have a lot of flavors, Häagen-Dazs only has traditional flavors, like Vanilla Bean, Coffee, Chocolate, and other basics. Eighth grader at Edison Intermediate School (EIS) Maren Restivo exclaimed, “Ben and Jerry’s is better all the way! They have a bigger variety of flavors.”

Although taste and flavors do have a good aspect in what makes a good ice cream brand, practicality is definitely a deal-breaker. According to Price-Listo.com, an average pint of Ben and Jerry’s ice cream costs about $5.49, while a Häagen-Dazs pint can cost up to $8.08. The cost difference is  $2.09. That is astronomical. It does not seem like a lot of money, but it adds up. Ice cream is a very popular food, especially in the United States. Let’s say the average American buys 20 pints in four months, that is $17.91 more for Häagen-Dazs versus Ben and Jerry’s.

When a child picks out an ice cream flavor, they look for the most exciting packaging and exotic flavors. The cover of a pint of ice cream for Ben and Jerry’s is customized to each flavor, while Häagen-Dazs is a plain-looking brand, and the designs on their pints are very minimalistic. Packaging is a huge aspect in marketing. Any brand owner could tell you that. “Ben and Jerry’s ice cream is better than Häagen-Dazs. It looks more appealing on the shelf so it makes me want to buy it,” EIS student Greta Pinto reported.

The next time you are grocery shopping and craving ice cream, pick Ben and Jerry’s. It will fulfill your needs of a delicious cold treat more than any other brand will.