Let’s get rid of prison for animals 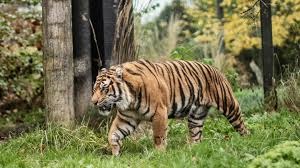 A lion wakes up to the startling and heart-wrenching sounds of banging on the wall. A group of children are smashing their hands against the glass and laughing. The lion seeks shelter to hide from the noise, but has nowhere to run. He cowards in fear looking for a way out of the prison. Except it isn’t a prison, It is the average zoo. Zoos are harmful to animals because they ruin animals’ natural instincts and animals are often not cared for as they should be.

Animals that are thrown into small enclosures in the zoo lose their natural instincts of hunting and being in the wild. Many zoos force the animals to live differently from how they would in the wild. “Birds’ wings may be clipped so that they cannot fly, aquatic animals often go without adequate water, and many animals who naturally live in large herds or family groups are kept alone, or at most, in pairs”(Writer). Animals in the wild are used to having thousands of miles to roam around with their herd. In zoos, they are separated from their family and thrown into exhibits, barely large enough for the animals to turn around in. This causes the animals to lose their natural instincts, and even develop health problems such as depression and anxiety.

In addition, zoos often don’t look after animals and only care about money. In many large zoos, animals are killed because they don’t make enough profit for the zoo. “Many zoos routinely kill healthy individuals they refer to as surplus animals because they’re no longer useful to them”(Bekoff). These animals aren’t useful to zoos anymore because they either can’t breed or take up too much space. As a result, zoos kill them to save money and make room for animals that will draw more attention from visitors. In many cases, old animals that aren’t bringing enough money to the zoo, are killed and replaced, with young animal cubs which generally bring more money to the zoo. This cycle continues, with the zoo killing dozens of animals a year.

Some people believe that zoos are important because they help educate the public on animals. However, it is obvious that most visitors in zoos ignore the educational side and focus entirely on the animals. “…to date there is no compelling or even particularly suggestive evidence for the claim that zoos and aquariums promote attitude change, education, and interest in conservation in visitors”(ProCon). The amount of harm done to the animals in zoos far outweighs the educational benefits of zoos. Zoos focus more on showing the animals off, then actually teaching people about their species.

All in all, zoos are detrimental to the wellbeing of animals because they ruin animals’ natural instincts and animals are often not taken care of. Animals are broken up from their families and forced to live in small enclosures. They are not allowed to hunt for their food, and are intimidated by large crowds watching them all day long. Therefore, zoos should not be permitted to operate unless they can provide the animals with a natural and safe environment to live.